This autumn 11th edition of Fashion Philosophy Fashion Week Poland Łódź took place on 22-26 of October. FASHIONCLASH Team had a great pleasure to attend for the fifth time and enjoy the biggest fashion party in Poland, to see the collections of Polish designers. We are pleased to see, how designers and the event are developing with every next edition. FASHIONCLASH has also experience with Polish designers - each year FASHIONCLASH Festival receives strong applications from Polish designers as well as choses the best ones to participate in next FASHIONCLASH edition.

We were pleased to see three of FASHIONCLASH designers at Fashion Week Poland: ODIO & Jakub Pieczarkowski, ZWYRD and Baiba Ladiga (for whom, we will present a separate posts on our blog).

OFF – Out of Schedule:
Out of Schedule always presents one of the most inspiring and creative collections, which match with the FASHIONCLASH concept. Off Out of Schedule is a place, where all the avant-garde, futuristic visions and the brave of Polish young designers meet. This year, majority of OFF’s stolen our hearts.

Paulina Ptashnik’s newest collection refers to the countryside and folk traditions, typical for finishing of harvests – a festival of Virgin Mary combined with a thanksgiving character and a competition with the most beautiful garland. The collection was based on bright colors, with beige and willow green as well as golden elements, while the main materials were flax, linen and knitted cotton fabrics. The character of the collection was enriched with the show in itself – the trio which had played live traditional folk polish music, gave unusual atmosphere.

Kas Kryst however has shown, that she is the queen of the black color and the unconvential forms. Furthermore, she focuses on the unusual connections and matches of the textures, materials and structures, which represent her wide inspirations and fascinations. In her newest collection she had played with the proportions of the silhouettes and the oversize forms and layers, which beautifully underlined figures of models. In Kas Kryst’s collection elegance meets the street style. Huge doze of applause for her.

On the last day of FashionPhilosophy Fashion Week Poland collection shown also Romana – her designs oscillated around the white, red, greys, violet and orange. She had presented an interesting color and pattern blocks – animal, op-art and  chequered pattern. The favor to the clothes had been added with small and surprising elements – pockets, stripes, fringes. Her collection can be used, as a huge inspiration for the upcoming spring-summer season.

Lastly – Monika Gromadzińska, who’s main inspiration in her SS2015 collection was the city of Łódź in itself. “Łódź you like?” (pronunciation of ‘Łódź’ resembles English word ‘Would’) presents the variety and contrast character of the Łódź in itself – starting from the architectural contrast (high-rise estates and their ‘modern’ termomodernisation in oppose to the palaces and beautiful palaces), through the two the most popular football clubs. These representation of the city is not only interesting to the foreigners, but also for people, who live in Poland. Her collection focused on the prints, patches, layers and semi-transparent materials. Additionally, the military patterns, mainly in the bright hues, were a big part of the collection. 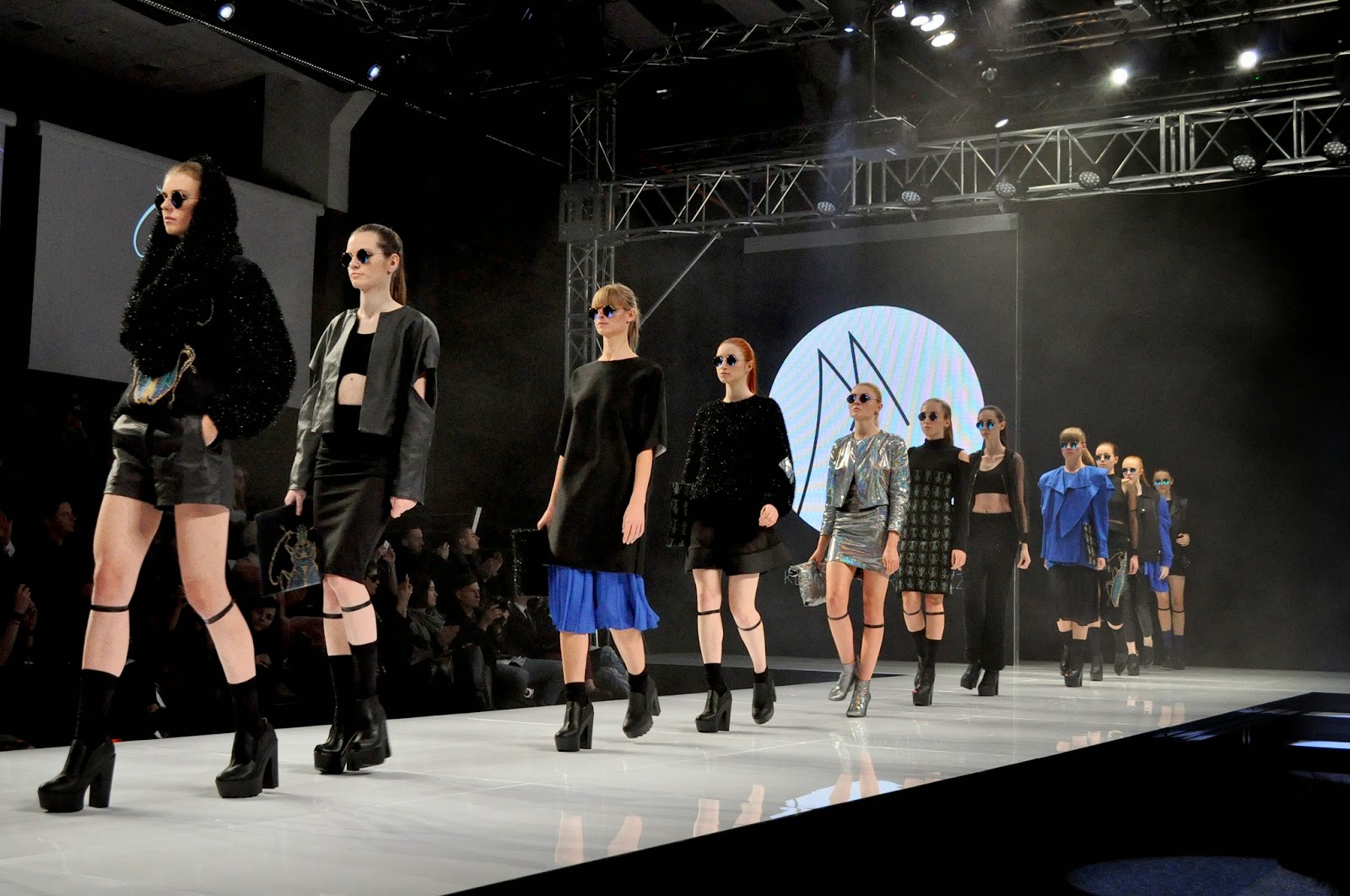 Studio:
Studio’s catwalk, similary as OFF Out of Schedule, often shows inspiring and creative collections. This time, our attention was caught by Karolina Marczuk and her colorful vision of casual street-wear. Her main inspiration was ‘blue’ aspect of nature, meaning – water and sky. She has also used a number of geometrical cut-outs.

Another inspiring collection was presented by Klaudia Markiewicz. Even, if her collection can be seen as not that much of avant-garde, more comercial, the creative solutions with different materials and propotions caught the attention of audience. Collection was focused on trends, which are present since some seasons, meaning crop-tops, leather, heavy boots, or high-waited shorts/skirts. We believe, that Klaudia's collection will be used as an inspiration for many young women, who like black and simple forms.

Designer Avenue:
On the first day, we really liked the show of NAH-NU Katarzyna Skorek,  her minimalistic and aesthetic collection. NAH-NU had presented her works of art (as she likes to talk about her designs), with intense colors (with the dominance of black, greys, white, but also intense orange or indigo, deep cut-outs , (semi-)transparent elements,  plackets and the basic and minimalistic forms. 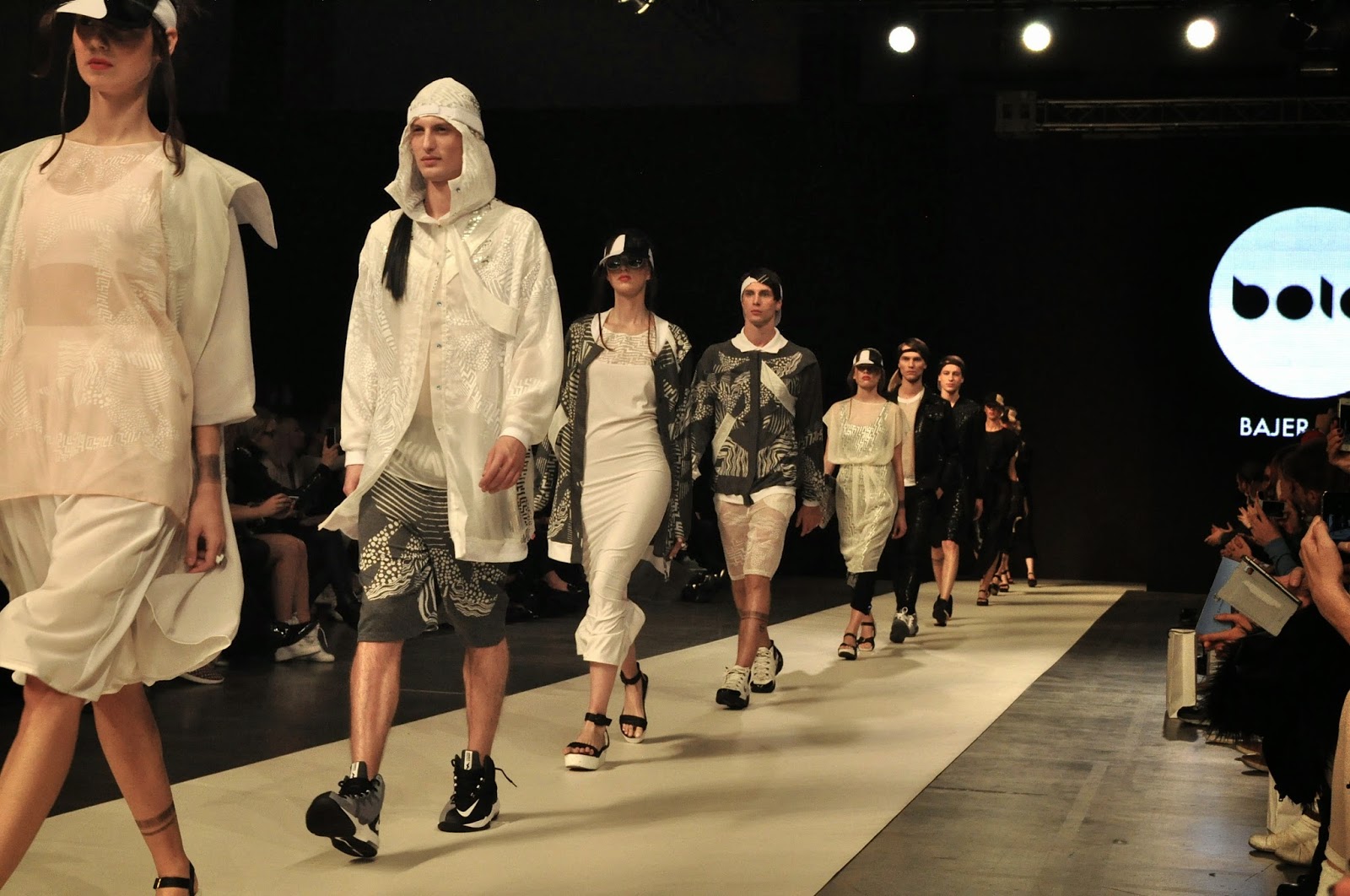 Another great show, was Bajer Ola – Bola’s collection on the second day of FWP. Bola’s aim is to combine art, trends and comfort in her pieces. Furthermore, Bola uses her own, self-made prints, various techniques, applications. Stylizations oscillated mainly on white, red and grey, with addition of silver and golden applications. We think, that it was one of the most original collection shown on the Designer Avenue. Bravo!

We have to admit, that every edition of FashionPhilosophy Fashion Week in Poland is getting more and more inspiring. We have an impression, that designers are constantly developing and giving themselves a possibility of being more brave and creative in their pieces. FASHIONCLASH team had really enjoyed the time, which we had spent in Łódź, we felt in love with new collections. We keep our fingers crossed for all Polish designers and we are looking forward for new dozes of inspirations from them.