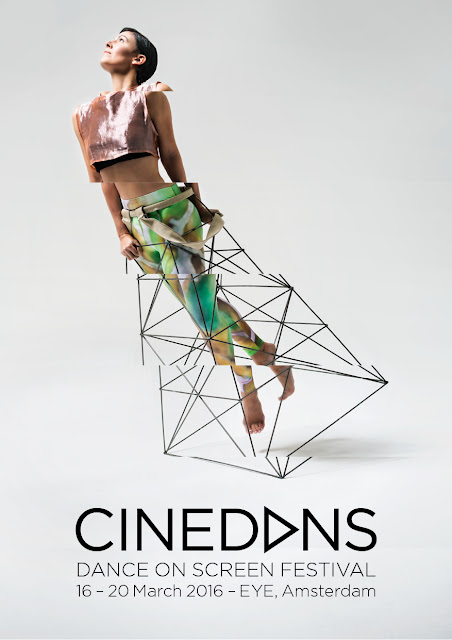 13th edition of the world’s leading international dance film festival, at the EYE in Amsterdam Cinedans – Dance on Screen will run from 16 to 20 March 2016.

FASHIONCLASH co-curated a program with short films where fashion and dance are flirting with each other.
FASHIONCLASH designer Judith van Vliet designed the costumes for the campaign of the 13th edition.

Held in the EYE film museum in Amsterdam, it is the largest and most diverse dance film festival in the world. Over the course of five days Cinedans will present the very best international dance films, documentaries and installations. Besides the short films, we’ll be screening the very impressive filmed performance of JOHN (Lloyd Newson’s final production with DV8 Physical Theatre) alongside documentaries such as Jaap Flier – Solist and Thin Skin, a film about choreographer Marco Goecke. And Cinedans will also be hosting the Dutch premiere of Wim Vandekeybus’ debut feature film Galloping Mind.


Shorts and Awards
The five shorts programmes – our selections of submitted short films – form the backbone of the festival. This year we’re giving particular attention to films made by choreographers working in the Netherlands, including Dunja Docic and Jelena Kostic. There are also shorts in which group movement plays a central role, and others that step across the boundaries in exciting crossovers with other disciplines and genres. Festivalgoers and a professional jury will be voting for the best films for the Dioraphte Cinedans Awards, the Audience Award, and the Cinedans Student Award (made possible by Canon). The €7500 and €2500 prizes for the two Dioraphte Cinedans Awards are the largest in the genre.
The festival line-up also includes several ‘specials’ – themed selections of dance films that focus on a particular topic. This year’s specials include Fashion & Dance (in collaboration with FASHIONCLASH), recently restored films by director Teo Hernandez from the Centre Pompidou archive, and the choreography of walking in films. Guest curator Gianni Grot (choreographer and winner of the 2015 Dioraphte Award) will be presenting his selection of urban dance films, and we’ll also get the chance to see Karel van Laere – the winner of the 2014 Cinedans Audience Award – in his latest film LARGO.

Point Taken 5 and Voices of Finance
The first two films for the fifth edition of Point Taken premiered at Cinedans festival in March 2015. The last two films will get their first cinema screening at this year’s festival, on 19 March. They are: - She/Her – choreographer: Cecilia Moisio, director: Sonja Wyss, producer: Family Affair Films - Dancin’ the Camera – choreographer: Marije Nie, director: Pieter-Rim de Kroon, producer: Windmill Film These premiere screenings will be followed by Voices of Finance, the latest film by Clara van Gool, which is based on Joris Luyendijk’s ‘Banking Blog’ for The Guardian. Ten dancers take the viewer on a journey into the heart of The City, London’s financial district.

Point Taken is an initiative of the Dutch Cultural Media Fund and the Performing Arts Fund, in collaboration with public broadcaster NTR and Cinedans. Point Taken enables choreographer- director partnerships to realise a joint plan for a short dance film. This fifth edition of Point Taken brings the series to an close. Its successor is De Wolf Danst (The Wolf Dances), an initiative of the Dutch Cultural Media, NTR/Het Uur van de Wolf, Cinedans and the Dutch Film Fund: a combination of a documentary of high artistic quality and an independent dance film. Documentaries Jaap Flier is a former ballet dancer and one of the founders of Nederlands Dans Theater. Jellie Dekker directed Jaap Flier – Solist, a documentary about his bold and sometimes wayward life choices. Rare Birds follows choreographer Alexander Ekman as he prepares his adaptation of the celebrated ballet Swan Lake, for which he submerged the stage of the Oslo Opera House in 6000 litres of water. A series of short urban documentaries puts the spotlight on women of the hip-hop scene. And choreographer Marco Goecke talks candidly about his life and work in Manon Lichtveld’s impressive Thin Skin.

Installations
This year Cinedans will for the first time place some of its interactive installations outside the EYE at various venues in the area, including the Tolhuistuin and the Clink hotel. Festivalgoers will be able to go on a guided tour where they’ll also get to meet the artists. Cinedans has co-produced Chair_Jump_Chute, Marloeke van der Vlugt’s new interactive installation which she designed especially for the EYE’s Arena hall. This piece was inspired by Merce Cunningham’s 1958 choreography Antic Meet. Van der Vlugt will discuss her work and inspirations as part of a special programme that will also include the screening of a live recording of Antic Meet.

Cinedans LAB
Cinedans champions developments in the dance film genre. This year’s festival includes workshops and courses (and presentations of their results) for a range of groups such as students from the Utrecht School of the Arts (HKU), Amsterdam University of the Arts (AHK), and the ROC regional education centre. On Sunday 20 March we’ll be hosting the premiere screening of Once Upon a Time in the North, a collaborative project between North Amsterdam’s Blue Wolf Dancers and Cinedans.

Reflection and exchange
In addition to presenting the most outstanding dance films, Cinedans offers a platform for reflection on the dance film genre. Each film programme ends with a Q&A session with the filmmakers, and dance film professionals will be here to give lectures and workshops.

National and international tours
Cinedans’s reputation is growing all the time. Last year we compiled programmes for film festivals in Bucharest, Ankara, Heidelberg, Zurich, Skopje, Miami, Hong Kong, Gent, Moscow, St Petersburg and Düsseldorf. Cinedans has also been popping up all around its home country of the Netherlands with film programmes at museums and independent cinemas. There are lots more national and international presentations in store for 2016. In what’s become a festival tradition, Cinedans will close with the awards presentations and the final party. And this year there’s something new on the programme: dance film karaoke.
Entrance is free to the festival closing party.