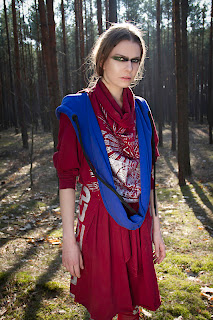 The Polish designer Agnieszka Natasza Splewińska graduated from The Władysław Strezemiński Academy of Fine Arts and Design in Łódź, Faculty of Textile Art and Fahion Design.


At FCM 2012 she will be presenting a women’s collection entitled ‘Space-specific’ The key concept during the work on the collection was ‘the future is now’.The title itself is a word puzzle. Natasza wanted to play with words and their meaning. 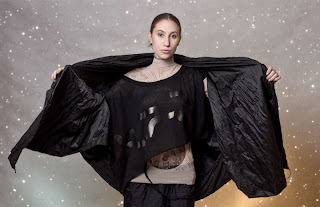 Natasza confesses that she was drawn to ilustrations of spacestations from the ’70s and ’80s where whole households and fields of crops were expanded into space. These utopian fantasies depict how the destruction of the planet leads humans to gain and manage outer-space. 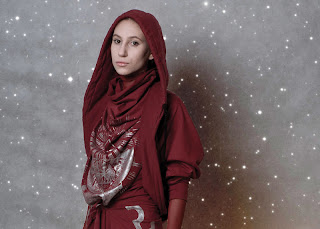 Another sourse of inspiration was a science-fiction classis, Ridles Scott’s movie ‘Balde Runner’ with its rich, spacious electric music compositions by Vangelis. The film is an acute vision of the future dealing with issues such as globalization, overpopulation, climate change and genetic engineering.

Details, fabrics, colors...
In terms of costume-design, Natasza was inspired by the details of a Scaphander. The ‘Space-specific’ collection is mostry made out of natural fabrics such as wool, cotton and leather. 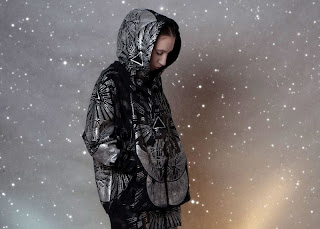 The color cheme is black, crimson, silver, prussian blue, marengo and grey. As ornaments the designer used black and silver screen-prints of motifs by Jacob Boehme (15th century German mystic and theologian) and a font designed by Wladyslaw Strezeminski.


The final result makes ‘Space-specific’ an artwork created to exist in a certain place, with the word ‘space’ refering to the realm, expanse or region beyond the earth, occuring between the celestial bodies of the universe.