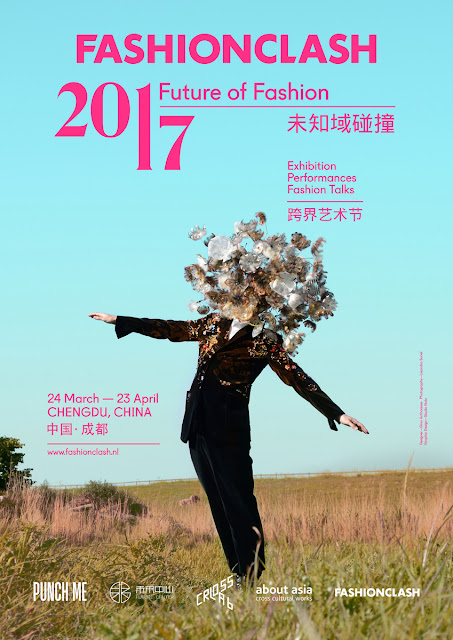 In March and April of this year, Maastricht-based interdisciplinary fashion platform FASHIONCLASH, jointly with Chinese partners Punch Me, Cross Lab and Dutch-Chinese organization About Asia will introduce “FASHIONCLASH 2017: Future of Fashion” in Chengdu.
After a successful first exhibition of FASHIONCLASH in China (2015), as part of an exchange programme between the cities of Maastricht (Netherlands) and Chengdu (Sichuan, China), FASHIONCLASH now presents a larger, more comprehensive, and complete story at the newly opened “Future Center” in downtown Chengdu from 24 March until 23 April.


‘Future of Fashion’ is a multidisciplinary exhibition composed out of work of more than 30 emerging designers and artists from The Netherlands and Flanders. The exhibition represents a broad spectrum of fashion design aesthetics, visions and various approaches to fashion. The presented work stands out for its concept, experimental material and textile, innovative shapes and tailoring. In addition to fashion the exhibition features screenings of interdisciplinary fashion films and performances. Among the participants there are award winning designers like Marlou Breuls and Nikki Duijst, avant-garde designers’ collective Das Leben Am Haverkamp and promising theatre makers like Lotte Milder and Milou van Duijnhoven. The selection of participants is an eclectic mix of designers that graduated from the top schools such as AMFI, ArtEZ Arnhem, MAFAD, KABK, Royal Academy of Fine Arts Antwerp and Theatre Academy Maastricht.
FASHIONCLASH gathered a team of theatre performers that will bring the exhibition alive. Studio Dennis Vanderbroeck created an overall concept that serves as a platform to connect the physical space of the exhibition with performance space and engage interactions with the audience.

Partners
In collaboration with the Chinese cultural initiative Punch Group and their cultural festival “PunchMe Art Festival”, FASHIONCLASH meets west China for the second time. The exhibition will be staged in ‘Future Center’, an unfinished raw space within a building that perfectly fits the spirit of the new generation designers and artists who are redefining the future with their visions. ‘Future of Fashion’ creations will temporarily find their home in this space and inspire the audience of the potential that lays ahead. Anything is possible! Like in a labyrinth FASHIONCLASH invites visitors to wander and get lost in imagination of the future fashion makers. The Chinese showcases of FASHIONCLASH are developed and initiated in close collaboration with About Asia; a Dutch-Chinese promoter of cultural and creative industries in west China.