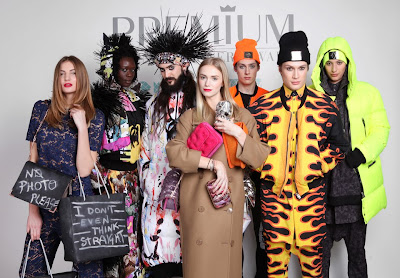 Fashion designer Tom Van Der Borght just won the C&A Reimagine Design Challenge and will be one of the show participants at FASHIONCLASH Maastricht 2013.
Additionally, his fashion creations can soon be bought at the Pop-Up Store at De Bijenkorf in Maastricht. Don't miss the unique chance of meeting this amazing talent!

Please introduce yourself:
Tom Van Der Borght (1978) is a fashion designer who lives and works in Gent. He is a graduate of the Stedelijke Academie voor Schone Kunsten Sint Niklaas. Tom Van Der Borght is not in search of traditional beauty or honey-sweet cutesiness. Bold combinations of bright colors, psychedelic graphics and textures make for a true bombardment of the senses. This new kid on the fashion block is not only exploring the boundaries of traditional beauty. He boldly crosses them to create his own standard of beauty. TVDB is always on the look-out for the unconventional and puts into question mainstream social structures. What does society considers normal and why? What is weird and why? His garments serve as armor for strong super humans in an urban setting. Yet all is not serious. A sense of humor and self-depreciative playfulness show in the way he teasingly covers and reveals in his designs. Another hint of this can be seen in his use of extreme detailing. Throughout his impeccably finished couture collections strong influences of streetwear reverberate. All prints used in Van Der Borght’s collection are originals. Modern, industrial techniques such as printing and digital knit happily co-exist with traditional handicrafts.

Where are you based?
Ghent – Belgium

What is it like to be a young designer in your city/country?
Belgium is a country with a rich tradition in fashion, and Ghent, the city i come from, is maybe unique in Belgium for it’s progressive DIY spirit. Therefor I like to live and work there.

What place/city do you find inspiring?
I really like Berlin as a city .... but inspiration can come from all places ... Actually i get the best ideas while i’m driving in my car :-D

What is the concept behind your latest collection?
A vision of apocalyptic gaucho-farmers celebrates yet again an eclectic mix of influences from the four corners of the wind. Inspired by Renaissance-engravings from Albrecht Durer and psychedelic dripping paintings of his own partner, Johannes Obers, the designer creates a new exciting series of handdrawn digital prints, depicting an apocalyptic tree of life and herds of ponies on the run. Returning to his own childhood, where he imagined to be a horse and ran around for days pony-style, the collection is an ode to those noble creatures. They form a symbol for the end of times as we know them, for a free run into a bright and enlightened future. Van der Borght is back in full force, showing a series of pleated garments, colourfull jacquard knits, rough rope knits, edgy streetwear basics and a series of mindblowing accesories using cablebands as a lead theme. Regular borders between men and women fade away easily, and the collections puts ‘the human’ back in the first place. Art is wearable from now on!

What kind of feeling do you want to transfer with your collection?
A dark mood with a twist.

Did you always wanted to work in the field of fashion?
No, I worked before as a social worker.

Do you have a muse? If yes, who is it and why?
I have had always a big admiration for Bjork, and the way how she shaped her highly artistic work into relatively accesible music.

Who is your favorite fashion designer?
It’s hard to say one name. I highly respect Bernhard Wilhelm and Walter Van Beirendonck, for their highly personal styles, Hussein Chalayan for his technical approach and Iris Van Herpen for her amazing sense for innovation.

Can you tell us something about the award you just won?
We had a crazy rides of awards. Just after graduation we won the ASVOFF Emerging Talent Award for our fashionmovie “Danny”. A month later our Aponycalypse-collection received the Premium Young Designer Award at Berlin Fashion Week. Just recently we also won the European Reimagine Design Challenge from C&A, where 8 young designers from different European countries made fashion items out of daily used objects.

What is on your music list while you're making your collection?
For every collection we have like a soundtrack we are drawn too …. For the newest collection we are listening a lot to Siriusmo and Otto Von Schierach. 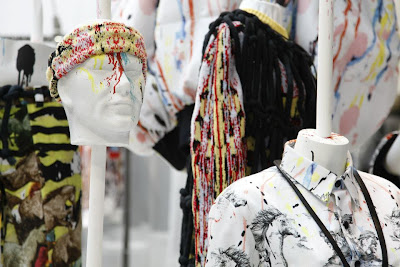 What made you smile today?
The sun.

What is the latest thing you bought for yourself?
A pair of second-hand tropical birdie-pants.

What can we expect from you in the future?
The unexpected.
Gepost door FASHIONCLASH op 06:51