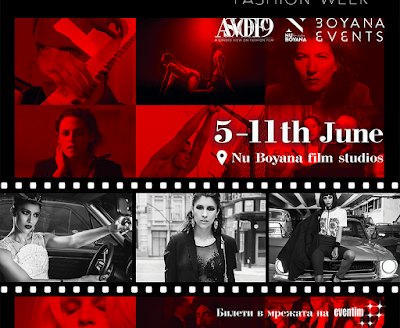 'The Parallel Pyramid Platform', one of the films from our project Act!Cut!Play! is part of the official 'in competition' selection of the ASVOFF9.

The international launch of ASVOFF 9 will be held in Sofia at Nu Boyana Film Studios June 9-11.
For the 9th edition of A Shaded View on Fashion Film [ASVOFF], founder and director of the festival Diane Pernet has invited her prestigious guests to ‘the Hollywood of the Balkans’, Nu Boyana Film Studios in Sofia, Bulgaria. Guests will be arriving from New York City, Los Angeles, Beijing, London, Berlin, Barcelona and of course, Paris.

Over three-days, more than 100 films will be screened at ASVOFF, the world’s first film festival dedicated to fashion, style and beauty. In addition to the 70 incompetition films there are 2 out of competition films, 5 documentaries, 12 student films, 13 wearable technology fashion films and 5 master classes during the festivities from June 9-11, 2017.
ASVOFF 9 will bring together cinematic greats and maverick directors in competition. They include Sean Baker, best known for his independent feature films Tangerine, Prince of Broadway, Take Out and Starlet; Ivan Olita; Tim Yip, the director that won two awards for art direction, sets and costumes for Ang Lee’s Crouching Tiger; Ellen von Unwerth; Emir Erlap and Daniel Askill. RANKIN’s tongue and cheek documentary about fashion and the 24 year-old artist, photographer and filmmaker Petra Collins behind the film Gucci Dreamscape will be sure to entertain.

With an ability to inhabit both arthouse and blockbuster productions, an exceptional group of acting talent feature in this year's selection including Kristen Stewart, Rossy de Palma, Emmanuelle Seigner, Waris, Dita Von Teese and Lady Gaga. Some of the many fashion brands which have commissioned films or feature in the ASVOFF 9 programme are: Gucci, Chanel, Dior, Kenzo, Yohji Yamamoto Hermes, Prada and many more. The festival offers a unique opportunity to discover both established and emerging brands and directors.


ASVOFF9 - This edition we take you where you've never been. from Diane Pernet's ASVOFF on Vimeo.

One of the many attractions during the festival will be a 48-minute homage to Bruce Weber, a living legend whose creative instincts have defined whole eras of photography, fashion and cinema over the course of his four-decade-long career. Meanwhile, the inimitable artist and wife of Alejandro Jodorowsky, Pascale Montandon-Jodorowsky will take us behind the scenes with a fly on the wall documentary of the making of Jodorowsky’s last film, Endless Poetry.

Steve Mann is the head of the first ASVOFF Wearable Technology Fashion Film Competition. Mann is widely regarded as "the father of wearable technology", inventor of wearable augmented reality, and co-inventor [with Minksy and Kurzweil] of the "sensularity" [sensory singularity].

ABOUT ASVOFF
Since its launch in 2008, ASVOFF (www.asvoff.com) has gained critical acclaim for encouraging both emerging and established artists to reconsider the way that fashion is presented and for challenging the conventional parameters of film. ASVOFF tours the globe with screenings at prestigious institutions and events like the Centre Pompidou, the Guggenheim, the Barbican, Art Basel Miami, CaixaForum Barcelona, the Franz Mayer Museum and the Cannes Film Festival in a host of creative capitals such as New York, London, Tokyo, Milan, Moscow, Mexico City. ASVOFF is not only a competition of short fashion, style and beauty films but also a travelling international event showcasing feature films, documentaries, conferences, performances and installations – making it a must-see on both the fashion calendar and the film circuit for its genre-bending and groundbreaking programme.

ABOUT DIANE PERNET
Diane Pernet is a world-renowned fashion critic and video journalist based in Paris. Previously a photographer and fashion designer, she now acts as documentary filmmaker, talent scout and fashion blogger. Pernet was one of the earliest fashion journalists to embrace the power of the internet, first through a column in online editions of Elle and Vogue and later through her own site, A SHADED VIEW ON FASHION (www.asvof.com) which since its inception in 2005 has become a ‘mustread’ in fashion and creative industry circles. Pernet was recognised in 2008 for being a pioneer in digital media when she was chosen as one of three influential global bloggers to take part in a panel celebrating a seminal fashion exhibition at New York’s Metropolitan Museum of Art. As one of the most recognisable faces in fashion, she has also been captured on the other side of the movie camera through cameo appearances in Robert Altman’s film, ‘Prêt-à-Porter’ and in Roman Polanski’s ‘The Ninth Gate’. While contributing to some of the most highlyacclaimed fashion magazines and pioneering online media, Pernet launched ASVOFF in 2008. As the founder of the world’s first film festival dedicated to fashion, style and beauty, she is widely considered to have incubated the ‘fashion film’ from its infancy to the popular genre that it is becoming today. Pernet is not only credited with providing the first platform of its kind for the ‘fashion film’ genre to evolve and flourish, but also with helping ‘fashion film’ to revolutionize aspects of the fashion industry, breathe life into static photography, offer a new outlet to filmmakers – and to trigger several important commercial, business and digital media opportunities across the fashion and movie industries.

ABOUT THE FASHION FILM GENRE
In just a few years the digital revolution has completely transformed the production of fashion images. No longer does fashion photography hold the monopoly, cinema is the new format for brand storytelling. A reciprocity and fascination has always existed between fashion and film but now fashion films have acquired their own status. New technology allows wide and less costly distribution of fashion film, enhancing its credibility. This phenomenon has not gone unnoticed by fashion brands of all sizes, who are commissioning more and more films from photographers, directors and emerging young talents. Most international brands have their own Vimeo and YouTube channels now and it is through these social channels that fashion film can be seen, shared and commented on by millions all over the world.

Although fashion films were originally simple ad spots, they have now adapted themselves as new communication tools. Sometimes, the most effective messages are neither direct nor aggressive. What they do is generate engagement and loyalty vis-à-vis the connected communities. Fashion films are not just about clothes and make-up or aesthetics. They lend themselves to all kinds of cinematic categories: from new interpretations of classic cinematic formats like the action-adventure, sci-fi thriller, black comedy, erotic fantasy, animation, horror flick, political satire, romantic blooper, docudramas to an infinite number of fascinating hybrid formats as well. With the proliferation of these short fashion films, a new cinematographic form has gradually taken the lead from fashion photography to becoming an essential expression of a brand’s universe. (Abridged text by Serge Carreira, maître de conférences at Sciences Po Paris)

For more information on the full schedule and briefs on all of the 5 master classes, please visit www.ashadedviewonfashionfilm.com
Gepost door FASHIONCLASH op 13:25