Getting to know Keta Gutmane 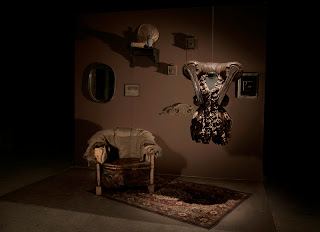 1. Please introduce yourself to our readers. (Who are you, where do you come from and what is your field of specialization?)
My name is Keta Gutmane. I am Latvian. I have graduated from the Art Academy of Latvia in Riga, where I was studying at the Department of Fashion Design.
During my studies, I focused on the conceptual creation of clothes and the development of fashion illustration. Currently, I am working as an independent designer creating separate clothes design collections, art installations, making costumes for films and working with individual customers, cooperating in separate interdisciplinary projects. 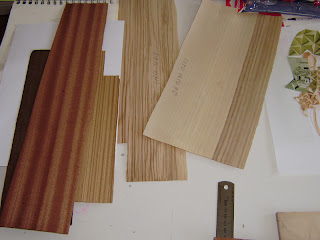 2. It is interesting that you, as a fashion designer, work with wood in order to create a dress installation – What made you go in that direction?
Initially, this is the story that gives me the direction, my personal observation, experience, things which are topical for me at that moment. And if this story leads me to parquet flooring deals, it provides me with a new experience and challenge. Then comes the most interesting part – I wonder if I will be able to deal with a material I have never worked before, if I will bring my vision into reality using this material as I intended to. As I have previously created garments from worn out armchairs, car seats, curtains and other similar things, I was certain that I could handle the flooring as well. 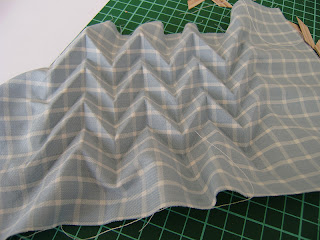 3. Can you talk us through the concept of your project?
The concept comes from and was developed along with the implementation of the idea for the fashion short film “Lust Lust” over a longer time period (the director of the film Martiņš Grauds was awarded the Grand Prix for the Best Fashion Short Film and Best Male Actor at the Diane Pernet fashion short film festival ASVOFF3 in Paris 2011). 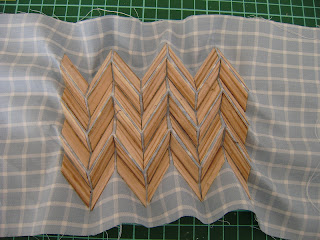 The idea of this major project is based on a very personal message about self-evident and ordinary things that happen in my and other people’s lives on a daily basis, about mutual peculiar influence of a person and his/her favorite interior accessories and furniture on each other, about the perception of space where we live and dwell every day. Thus, we create a story about order of things influenced from several sides – subject, social and human. In my workshop and apartment I have been walking on the parquet floor every day for years. 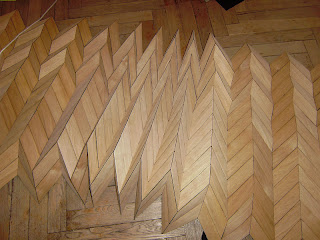 The floor is a fundamental component of any room interior. At some point, you want to destroy this dimension in an illusionary way, continuously focusing on the systematic combination of 2D patterns, thus, the effect of 3D object develops, similarly happens when looking at the autostereogram drawings in the book series Magic Eye. Later on, the film director Mārtiņš Grauds was inspired by the installation and created a story, which was then made into the short film Creak.

4. Your work looks really complex, what were the difficulties while working with wood in order to make the installation happening?
The stress was put on the author’s technique, the research process was important for me – studying different combinations of patterns made from parquet flooring deals, as a result, in the process of numerous experiments textile material was created in author technique. It consists of oak tree grain and texture, the pattern of which is made precisely repeating the combination of parquet floor pattern mosaic, bending which systematic 3D modules are created. 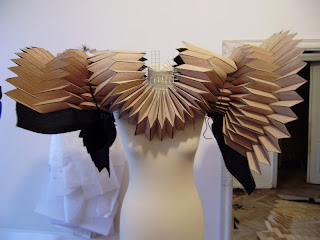 The hardest stage was when I had to attach every module to the frame by hands, take a photo of them and remove them, then reattach them again until I reached the particular shape. This process was very long and hard. The grain is peculiar by its nature; it is sensitive to room temperature changes. It was such an experience to put the installation into life, bring it into motion in the film “Creak” and transport it to the shooting location and back, there were many people involved, it took a lot of time and I am very thankful to them all. 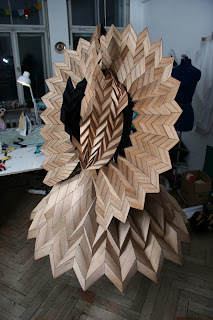 5. Since you studied fashion design how did you get the skill to also work with more fundamental materials (such as wood)?
The concept of my every work, the idea I am going through during the process is like a new discovery, a unique experience, it is always something new for me and I never know how it is going to end. Because of my ideas and stories, I have dealt with a certain material and situation which have developed my skill or inability – let the viewer judge – to work with such different range of materials. During my studies, I had to work with textiles only.