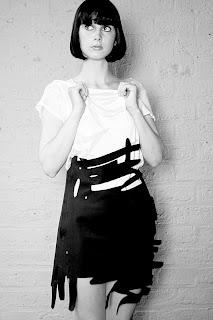 1. Please introduce yourself to our readers. (Who are you, where do you come from and what is your field of specialization?)
My name is Elvira ‘t Hart and I’m 23 years old. I graduated in 2011 from the Rietveld Academy in Amsterdam in Fashion Design.


2. Where do you get your inspirations from?
A lot of inspiration comes from my own drawings. There is no real inspiration when I draw, mostly I draw just for the sake and love of drawing. Occasionally I’m really ‘designing’ while I draw or depicting a design that’s already in my mind.
Sometimes I see a drawing I made weeks ago without any purpose. After my initial surprise that I made it myself there's a sense of fascination. From there it grows into a new design or print. 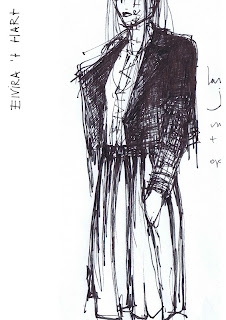 3. What fascinates you about fashion design and what made you go in this direction?
Since an early age I found the only thing I truly enjoy drawing is the human body and deciding how to dress it. It’s like dressing dolls, but better. Instead of working with a given set of clothes you start with nothing. And from there on it completely depends upon your imagination.
When I was little I used to stage my own exhibition with Barbies dressed in clothes I made out of old towels and paper. 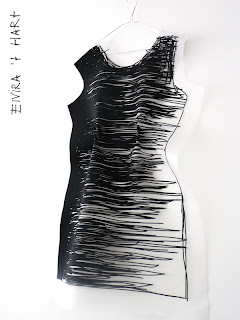 4. Please tell us something about your concept.
The starting point was very similar to my graduation project. I did research on how to execute something which was turning 2D into 3D. There are many different ways to interpret a 2D image into a 3D image and I ended up with a collection of ideas on how to execute 1 image in different ways, but all with the same visual image. I continued with my fascination for sketches and drawings of clothes, a drawing doesn’t have to be finished to give you an idea of that which is depicted.
I think an unfinished drawing/sketch is even more interesting than a finished picture, it leaves something to the imagination. The end result and purpose of my concept is that it should look like it has been drawn directly on the model. 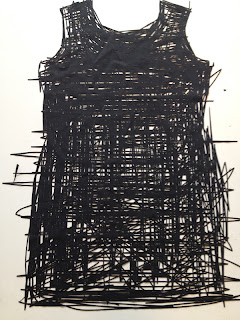 5. The final looks of your collection are very interesting - walk us through the process of turning the sketches into something wearable.
The most common way of designing clothing would be to have the drawing/idea, which is then interpreted into clothing. In between there are the technical drawings and the pattern making.
But in my opinion so much of the original sketch is lost in translation. I had to find a way to get more of the original sketch into a design by trying to go straight from the first sketch to 3D, making the sketch my pattern or literary sketching my patterns and trying not be influenced too much by all the technical stuff. It was one big surprise how and if things would work. 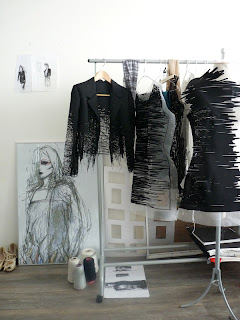 6. Where do you get the ideas for the prints from?
Unsurprisingly, the prints are a direct result of earlier sketches. For the most part it's rediscovering old work and applying them in a new context.

7. How do you personally define „fashionclash“ or „ a clash with fashion“ for yourself?
Currently, for my collection it’s the clash and also interaction between my two driving forces: drawing and fashion. One flat, the other dimensional. Each can be seen as dependent on the other, but they don't necessarily belong together. 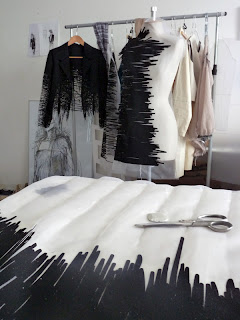 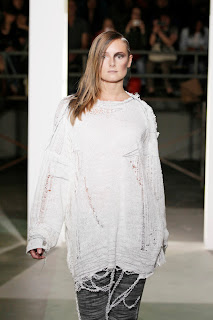