Visual artist Alya Hessy, graduated from the Gerrit Rietveld Academie in 2015, operates in the world between the body and textiles. Born in Ukraine, living in the Netherlands and fascinated by Japan, Alya explores the realms of politics, philosophy and physicality through making objects, writing and performing. She seeks emptiness as a way of letting go of the pre-defined and allowing multiple interpretations.

You can see Alya Hessy's work during FASHIONCLASH Festival at the Heritage Exhibition (July 1 + 2 at SAMdecorfabriek) and Heritage Show + Talk (July 3 at Gebouw M, Tapijnkazerne).

When did you realise you wanted to be a fashion designer?
I have always been busy with art through my life, but it became the main thing when I went to study to the Rietveld Academy, where I graduated in the summer 2015. 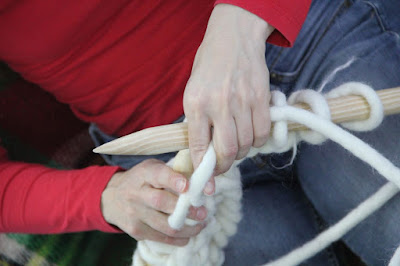 What are your main achievements in your career at this moment?
Showing my graduation work at the Fries Museum in October-November 2015 has been exhilarating. I also had a working week there, an Open Atelier, for which I developed two performances. One of these performances is coming to FASHIONCLASH Festival 2016!

In what projects are you involved at this moment?
I am exploring new possibilities through collaborations with inspiring people. I am resear
ching the meaning of craft through history and now. And I am still trying to figure out life, ha-ha!

Who are your artistic influences or inspirations and why?
Louise Bourgeois: incredibly consistent, stubborn and mischievous. Kenya Hara about the concept of emptiness as an opening of possibilities. Japanese spaces, gardens, poetry. Roland Barthes “ The Empire of Signs” – a collection of refined witty essays on various aspects of emptiness in Japanese culture. 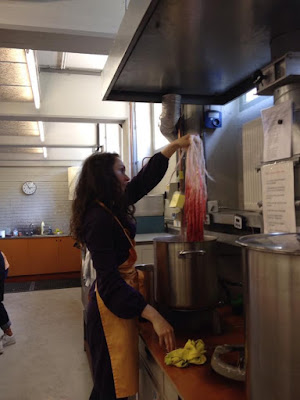 Finding your own voice is difficult, where and how do you find your personal creativity (before you start designing; during the design process)?
I use my background in computer programming for collecting, analysing and dissecting data, extracting the essence. I combine it with an intuitive approach to feel the quality of the material and find a way of shaping it.

What do you want to communicate with your designs in general?
Make space.
Take your time.
Look.
Listen.
Feel.

Can you tell us something about the project you will present at the FASHIONCLASH Festival?
Together with a choreographer and my co-performer Pavlos Marios Ktoridis we will explore the physicality of knitting. It is a durational performance, which we will perform during the Heritage Exhibition on July 1&2.

Why have you decided to participate at FASHIONCLASH Festival?
The topic Heritage triggered me, as for the performance (that will be shown on the festival) I work with an old heritage craft of knitting. In my work I strive for emptiness (multiple possibilities). It is exciting to place this work in yet another context, that of fashion.

What can we expect from you at the festival?
A seemingly simple action, a whole range of human emotions, growing material: human relationship as a garment.

Read more about Alya and her work here: http://www.alyahessy.com